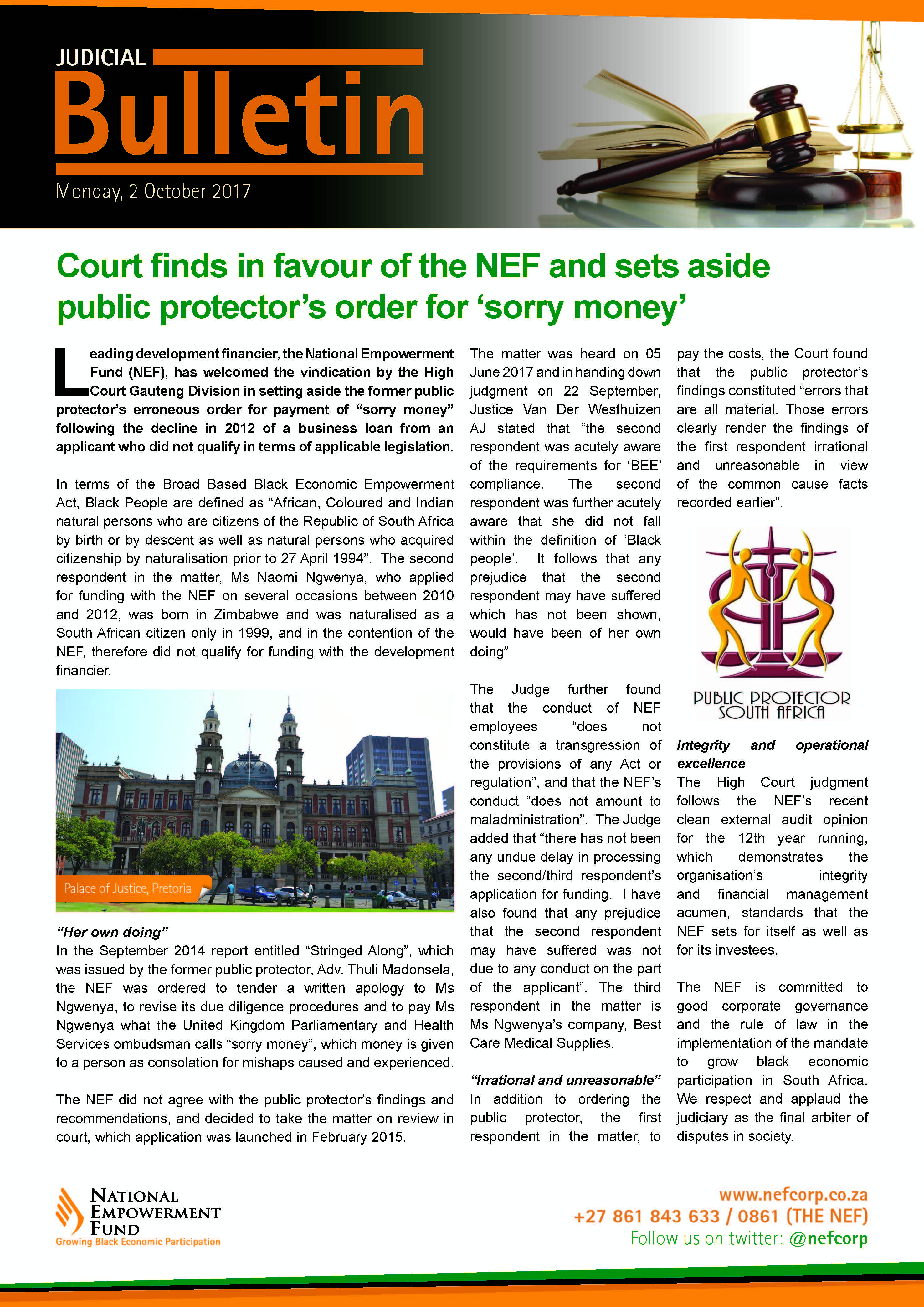 Leading development financier, the National Empowerment Fund (NEF), has welcomed the vindication by the High Court Gauteng Division in setting aside the former public protector’s erroneous order for payment of “sorry money” following the decline in 2012 of a business loan from an applicant who did not qualify in terms of applicable legislation.

In terms of the Broad Based Black Economic Empowerment Act, Black People are defined as “African, Coloured and Indian natural persons who are citizens of the Republic of South Africa by birth or by descent as well as natural persons who acquired citizenship by naturalisation prior to 27 April 1994”. The second respondent in the matter, Ms Naomi Ngwenya, who applied for funding with the NEF on several occasions between 2010 and 2012, was born in Zimbabwe and was naturalised as a South African citizen only in 1999, and in the contention of the NEF, therefore did not qualify for funding with the development financier.

In the September 2014 report entitled “Stringed Along”, which was issued by the former public protector, Adv. Thuli Madonsela, the NEF was ordered to tender a written apology to Ms Ngwenya, to revise its due diligence procedures and to pay Ms Ngwenya what the United Kingdom Parliamentary and Health Services ombudsman calls “sorry money”, which money is given to a person as consolation for mishaps caused and experienced.

The NEF did not agree with the public protector’s findings and recommendations, and decided to take the matter on review in court, which application was launched in February 2015.

The Judge further found that the conduct of NEF employees “does not constitute a transgression of the provisions of any Act or regulation”, and that the NEF’s conduct “does not amount to maladministration”. The Judge added that “there has not been any undue delay in processing the second/third respondent’s application for funding. I have also found that any prejudice that the second respondent may have suffered was not due to any conduct on the part of the applicant”. The third respondent in the matter is Ms Ngwenya’s company, Best Care Medical Supplies.

The High Court judgment follows the NEF’s recent clean external audit opinion for the 12th year running, which demonstrates the organisation’s integrity and financial management acumen, standards that the NEF sets for itself as well as for its investees.

The NEF is committed to good corporate governance and the rule of law in the implementation of the mandate to grow black economic participation in South Africa. We respect and applaud the judiciary as the final arbiter of disputes in society.

Thank You, NEF. You’ve Put a Smile on My Face