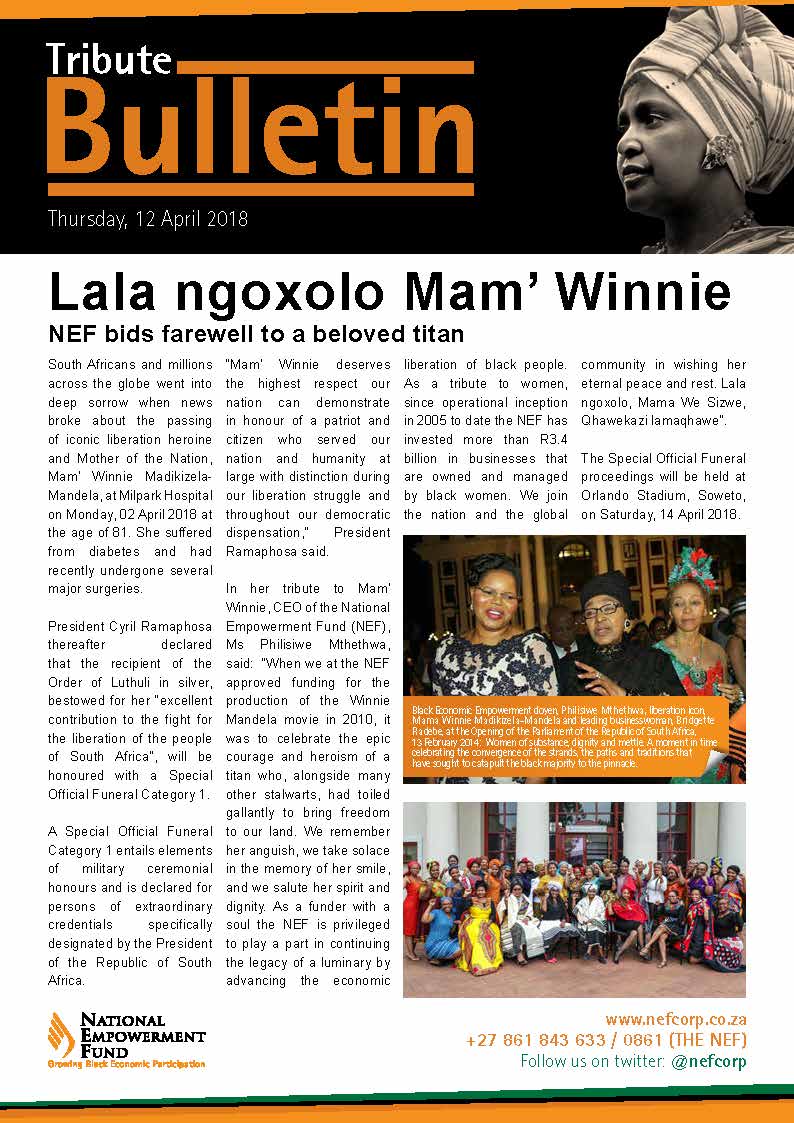 South Africans and millions across the globe went into deep sorrow when news broke about the passing of iconic liberation heroine and Mother of the Nation, Mam’ Winnie Madikizela- Mandela, at Milpark Hospital on Monday, 02 April 2018 at the age of 81. She suffered from diabetes and had recently undergone several major surgeries.

President Cyril Ramaphosa thereafter declared that the recipient of the Order of Luthuli in silver, bestowed for her “excellent contribution to the fight for the liberation of the people of South Africa”, will be honoured with a Special Official Funeral Category 1.

A Special Official Funeral Category 1 entails elements of military ceremonial honours and is declared for persons of extraordinary credentials specifically designated by the President of the Republic of South Africa.

“Mam’ Winnie deserves the highest respect our nation can demonstrate in honour of a patriot and citizen who served our nation and humanity at large with distinction during our liberation struggle and throughout our democratic dispensation,” President Ramaphosa said.

In her tribute to Mam’ Winnie, CEO of the National Empowerment Fund (NEF), Ms Philisiwe Mthethwa, said: “When we at the NEF approved funding for the production of the Winnie Mandela movie in 2010, it was to celebrate the epic courage and heroism of a titan who, alongside many other stalwarts, had toiled gallantly to bring freedom to our land. We remember her anguish, we take solace in the memory of her smile, and we salute her spirit and dignity. As a funder with a soul the NEF is privileged to play a part in continuing the legacy of a luminary by advancing the economic liberation of black people. As a tribute to women, since operational inception in 2005 to date the NEF has invested more than R3.4 billion in businesses that are owned and managed by black women. We join the nation and the global community in wishing her eternal peace and rest. Lala ngoxolo, Mama We Sizwe, Qhawekazi lamaqhawe”.

The Special Official Funeral proceedings will be held at Orlando Stadium, Soweto, on Saturday, 14 April 2018.

The fifth of nine children, Nomzamo Winifred Zanyiwe Madikizela was born in the village of Mbongweni, Bizana, in the Transkei on 26 September 1936.

When she was still young, two tragic events hit. Firstly her elder sister, Vuyelwa, contracted tuberculosis and passed – an event which shook Winnie’s belief in the God her mother had ardently prayed to during her daughter’s demise. Secondly, soon after her sister’s passing, Winnie’s mother also developed the disease and died. However, shortly before her mother passed away she gave birth to a baby boy, whom Winnie took responsibility for during her mother’s incapacitation, and after her death.

In 1945, when she was only nine years old, Winnie had her first conscious experience of what the strictures and injustices of racism and apartheid meant in South Africa. News had just arrived in Bizana that the Second World War had ended, and celebrations had been scheduled. Along with her siblings, Winnie begged their father to attend, and eventually he agreed to their demand. However, upon arriving at the town hall, it emerged that these celebrations were “for whites only” and the children were forced to remain outside with their father while the white people enjoyed the merriment within. The obvious injustice struck a deep blow for Winnie, and thereafter she grew increasingly sensitised to the inequality of the world around her.

In 1953, upon her father’s advice, Winnie was admitted to the Jan Hofmeyr School of Social Work in Johannesburg, where Nelson Mandela (who was already gaining national renown), was the patron. It was the first time she left the Transkei and this became a formative moment in her life. It was in Johannesburg that she saw the full manifestation of Apartheid tyranny on a daily basis, but also where she discovered her love of fashion, dancing and the city. It was only after a few months of living in Johannesburg that Winnie first went to Soweto.

She completed her degree in Social Work in 1955, finishing at the top of her class, and was offered a scholarship for further study in the USA. However, soon after receiving the scholarship offer, she was offered the position of medical social worker at the Baragwanath Hospital in Johannesburg, making her the first qualified, Black member of staff to fill that post. Following an agonising decision about whether to leave and further her academic career in the USA, or to stay and pursue her dream of becoming a social worker in South Africa, she decided to remain in South Africa.

Winnie was 22-years old and standing at a bus stop in Soweto when Mandela first saw her and charmed her, securing a lunch date the following week. He was already a famous antiapartheid figure and one of the key defendants in the Treason Trial, which had commenced the year before, in 1956. On March 10 1957, Nelson asked Winnie to marry him and they celebrated their engagement together in Johannesburg.

Despite government restrictions on the movements of Treason Trial defendants, Winnie and Nelson got married on 14 June 1958, in Bizana. The celebration caught national interest and was reported in publications such as Drum Magazine and the Golden City Post.

In October 1958, Winnie took part in a mass action which mobilised women to protest against the Apartheid government’s infamous pass laws. This protest in Johannesburg followed a similar action that had taken place in Pretoria in August 1956. The Johannesburg protest was organised by the president of the ANC Women’s League, Lilian Ngoyi and Albertina Sisulu, amongst others.

On March 30 1961, nine days after the police murdered sixty-nine people and injured over 200 marchers during an anti-pass demonstration at Sharpeville, a police raid on the Mandela home saw Nelson arrested and Winnie left by herself, in what would become her overarching experience of marriage.

With her husband in jail, the authorities increased the pressure to make Winnie’s life as difficult as possible, with her children Zenani and Zindziswa particularly targeted. On numerous occasions Winnie enrolled them into schools, only for the security police to find out and insist that the schools have them expelled. This was in addition to the continued raids on her house, her banning order and frequent last minute refusals to visit her husband in jail.

In 1973, she was sentenced to 12 months suspended for three years for having lunch with her children in a vehicle in the presence of a banned person. The sentence was reduced on appeal to six months, which she served at Kroonstad prison. In 1976, she was detained without trial for four months after the June 16 Soweto uprising, in which schoolchildren who protested against the imposition of Afrikaans as the medium of instruction, were fired upon and killed mercilessly by the police, and some 500 died across the country on the day.

In 1977, her banning order was renewed for five years – in 13 years, she lived for only 10 months without a banning order. Despite Winnie’s strength of mind and fierce fighting spirit, she became extremely ill during her 491-day stay in prison, the result of long months of solitary confinement and the poor diet, which often consisted of porridge with maggots in it. She suffered chest pains, palpitations, body spasms, haemorrhaging, loss of appetite and chronic weight loss.

The struggle for liberation in South Africa was increasingly being taken up the country’s youth and Winnie found herself settling into a new role to as the symbolic mother to this burgeoning student movement. In May 1976, just a few weeks before the famous student uprising in Soweto, Winnie Mandela along with Dr Nthatho Motlana helped to establish the Soweto Parents’ Association. In the weeks that followed the violence and killings of the black youth of June 16, Winnie and Dr Motlana had their hands full attending to youth and parents who had been arrested, injured or killed in the riots.

Then, in May 1977, in a devastating move, she was banished to Brandfort, a tiny town in Free State province, some 200 kilometres from Johannesburg, with her 16-year-old daughter, Zinzi. She lived in a small box house, with “no running water, no electricity, and the house had no floors or ceilings. She opened a clinic and a crèche, and initiated feeding schemes for the young children of Brandfort, where she lived for nine years.

But she defiantly returned to Soweto in 1986, where she continued to lead the struggle for liberation. This led to her being lovingly dubbed the “Mother of the Nation”. Alongside other activists, she emerged as a leading opponent of Apartheid until freedom dawned in 1994 with the country’s first ever democratic elections.

Following the end of Apartheid, she continued to serve on the National Executive Committee of the governing party and headed its Women’s League, and between 1994 and 1996 she was the Deputy Minister of Arts and Culture. Her 38-year marriage with former President Nelson Mandela ended in 1996. She continued to serve as a Member of Parliament until she succumbed peacefully in the early hours of Monday afternoon surrounded by her family and loved ones.

Throughout her adult life she was harassed, demonised, humiliated, persecuted and tortured. For the majority she remains a gallant hero of the Liberation Struggle.

The NEF Delivers Information to The Northern Cape Entrepreneurs

On 10 October 2017, as part of its nationwide outreach campaign, the National Empowerment Fund…

The Gift of Oneness

Good morning, Executives and Colleagues, and Season’s Greetings to you all. We meet today in…