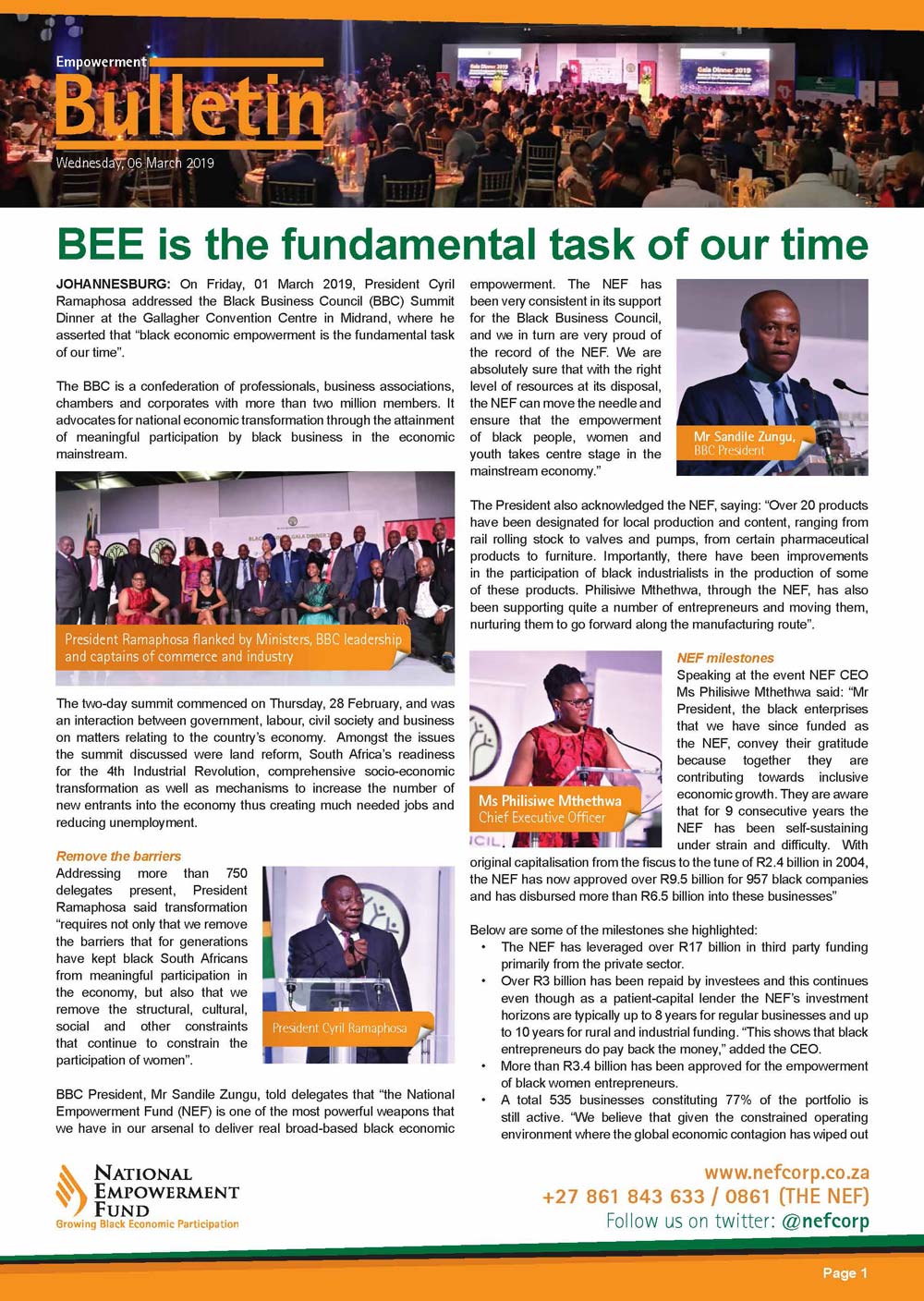 JOHANNESBURG: On Friday, 01 March 2019, President Cyril Ramaphosa addressed the Black Business Council (BBC) Summit Dinner at the Gallagher Convention Centre in Midrand, where he asserted that “black economic empowerment is the fundamental task of our time”.

The BBC is a confederation of professionals, business associations, chambers and corporates with more than two million members. It advocates for national economic transformation through the attainment of meaningful participation by black business in the economic mainstream.

The two-day summit commenced on Thursday, 28 February, and was an interaction between government, labour, civil society and business on matters relating to the country’s economy. Amongst the issues the summit discussed were land reform, South Africa’s readiness for the 4th Industrial Revolution, comprehensive socio-economic transformation as well as mechanisms to increase the number of new entrants into the economy thus creating much needed jobs and reducing unemployment.

BBC President, Mr Sandile Zungu, told delegates that “the National Empowerment Fund (NEF) is one of the most powerful weapons that we have in our arsenal to deliver real broad-based black economic empowerment. The NEF has been very consistent in its support for the Black Business Council, and we in turn are very proud of the record of the NEF. We are absolutely sure that with the right level of resources at its disposal, the NEF can move the needle and ensure that the empowerment of black people, women and youth takes centre stage in the mainstream economy.”

The President also acknowledged the NEF, saying: “Over 20 products have been designated for local production and content, ranging from rail rolling stock to valves and pumps, from certain pharmaceutical products to furniture. Importantly, there have been improvements in the participation of black industrialists in the production of some of these products. Philisiwe Mthethwa, through the NEF, has also been supporting quite a number of entrepreneurs and moving them, nurturing them to go forward along the manufacturing route”.

Speaking at the event NEF CEO Ms Philisiwe Mthethwa said: “Mr President, the black enterprises that we have since funded as the NEF, convey their gratitude because together they are contributing towards inclusive economic growth. They are aware that for 9 consecutive years the NEF has been self-sustaining under strain and difficulty. With original capitalisation from the fiscus to the tune of R2.4 billion in 2004, the NEF has now approved over R9.5 billion for 957 black companies and has disbursed more than R6.5 billion into these businesses”

Below are some of the milestones she highlighted:

Ms Mthethwa expressed concern about “those who equate black leadership, black professionals and black business with graft, corruption and ineptitude. The NEF, as an example, has secured clean external audit opinions for 15 years running, which points to a track-record of integrity, best practice and operational excellence. We are neither an island nor an exception in this distinction, and indeed we can point to many in our portfolio, in the rollcall of the BBC and across the country, who carry the pride of black excellence with dignity, integrity and fortitude”.

Recapitalisation of the NEF

“We are confident, Mr President, that the recapitalisation of the NEF will soon be resolved so that usithume, Mongameli, send us to build our nation alongside the BBC and the black professionals who are second to none across the face of the earth. Among these we must locate women at the forefront of the economy, confident that once again they will lead more and more state-owned enterprises, and across the private sector as well,” said CEO Mthethwa.

In a wide-ranging address, President Ramaphosa said Government will expand the country’s export capacity through industrial incentives, special economic zones and investment in rail and port infrastructure. The President identified the black industrialist programme as one of several instruments Government is using to ensure that emerging black business is “able both to benefit from, and contribute to, the growth of our productive economy”.

He said since the programme began in 2016 over 130 black industrialists have been financially supported but that many of these are “constrained by high barriers of entry, limited marketing capacity, saturated markets, high transaction costs and poor market research. In response, government has assisted more than 100 of these industrialists with access to opportunities in the public and private sectors.”

Building on the success of the programme, the President told the BBC Summit that efforts are underway to expand it beyond manufacturing, “using the same principles in sectors such as construction, property, tourism, mining and agriculture. As these and other black-owned companies succeed, there is an expectation that they will support the emergence of new black companies, that they will create employment, that they will contribute their due to the public fiscus, and that they will be good corporate citizens”.

The village of Moletši, located 53 kilometers outside Limpopo’s provincial capital of Polokwane, erupted into…