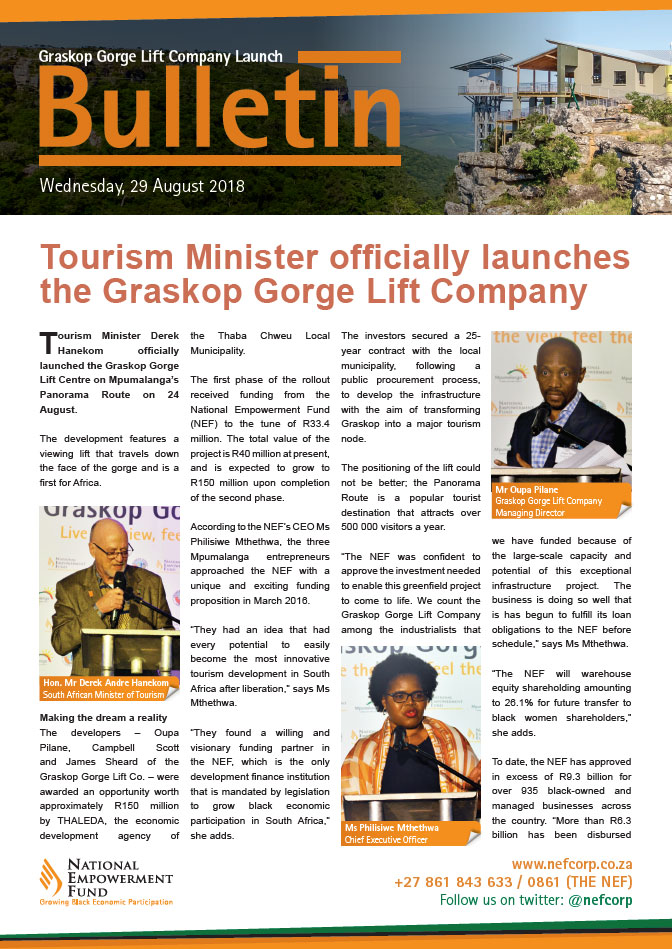 Tourism Minister Derek Hanekom officially launched the Graskop Gorge Lift Centre on Mpumalanga’s Panorama Route on 24 August. The development features a viewing lift that travels down the face of the gorge and is a first for Africa.

Making the dream a reality

The developers – Oupa Pilane, Campbell Scott and James Sheard of the Graskop Gorge Lift Co. – were awarded an opportunity worth approximately R150 million by THALEDA, the economic development agency of the Thaba Chweu Local Municipality.

The first phase of the rollout received funding from the National Empowerment Fund (NEF) to the tune of R33.4 million. The total value of the project is R40 million at present and is expected to grow to R150 million upon completion of the second phase.

According to the NEF’s CEO Ms Philisiwe Mthethwa, the three Mpumalanga entrepreneurs approached the NEF with a unique and exciting funding proposition in March 2016.

“They had an idea that had every potential to easily become the most innovative tourism development in South Africa after liberation,” says Ms Mthethwa.

“They found a willing and visionary funding partner in the NEF, which is the only development finance institution that is mandated by legislation to grow black economic participation in South Africa,” she adds.

The investors secured a 25- year contract with the local municipality, following a public procurement process, to develop the infrastructure with the aim of transforming Graskop into a major tourism node.

The positioning of the lift could not be better; the Panorama Route is a popular tourist destination that attracts over 500 000 visitors a year.

“The NEF was confident to approve the investment needed to enable this greenfield project to come to life. We count the Graskop Gorge Lift Company among the industrialists that we have funded because of the large-scale capacity and potential of this exceptional infrastructure project. The business is doing so well that is has begun to fulfill its loan obligations to the NEF before schedule,” says Ms Mthethwa.

“The NEF will warehouse equity shareholding amounting to 26.1% for future transfer to black women shareholders,” she adds.

To date, the NEF has approved in excess of R9.3 billion for over 935 black-owned and managed businesses across the country. “More than R6.3 billion has been disbursed directly into the economy and together these investees have generated well over 96 000 decent jobs.”

“The Graskop Gorge Lift Centre is a dream come true. Not only for the investors but for the people of Graskop and communities across the province which are and will continue to benefit from the growth in tourism to the region,” says Mr Pilane.

“This would not have been possible without support from the NEF and we thank the fund for believing in us and for understanding that tourism is one of the biggest growth sectors in our economy,” he adds.

The Minister of Tourism, The Hon. Derek Hanekom, applauded the Graskop Gorge Lift Centre as an offering that demonstrates the National Tourism Sector Strategy in action as it will enhance the visitor experience, showcase innovation in destination management and demonstrate the broad-based benefits in the tourism sectors.

“For this reason, Graskop Gorge Lift Co. will receive R5 million for their next development through the R120 million Tourism Transformation Fund of the Department of Tourism. We need more projects such as the Graskop Gorge Lift Centre to enhance our tourism offerings so that South Africa can be more competitive as a tourist destination and in the process create more sustainable jobs for our people,” stated Minister Hanekom.

The Deputy Minister of Trade and Industry, The Hon. Mr Bulelani Magwanishe, said as a key entity of the Department of Trade and Industry, the NEF is implementing the dtic’s industrial policy very well. In doing so, it has saved critical industrial capabilities in a variety of sectors. He added that the NEF is a pioneer of Radical Socio-Economic Transformation and urged them to keep up the good work for an inclusive economy to be realized.

“The Graskop Gorge Lift Graskop Gorge Lift Company Launch Hon. Mr Bulelani Magwanishe Deputy Minister of Trade and Industry project is proof of the fact that integrated support and efforts between government, the private sector and other stakeholders can cultivate meaningful outcomes. A project of this nature will push the tourism sector to the next level,” said Deputy Minister Magwanishe.

Since opening its doors to the public in December 2017, the Graskop Gorge Lift Centre has delighted thousands of people who have had their souls touched by Africa’s first viewing lift – which travels 51-metres down the face of the Graskop Gorge and into the Afromontane forest below.

The forest is explored via a 600-metre elevated circular trail. It is a sensory delight, full of sounds, texture and unforgettable sights. Water drips down rock faces, moss grows in abundance, the river dances across boulders and the waterfall cascades. A rich, earthy smell lingers and little flowers vie for attention next to towering trees.

The centre also has an enticing restaurant that is perched on the top of the cliff edge; a contemporary African art gallery, colourful African fashion clothing shop, curio shop and a community crafts market.

The Gift of Oneness

Good morning, Executives and Colleagues, and Season’s Greetings to you all. We meet today in…