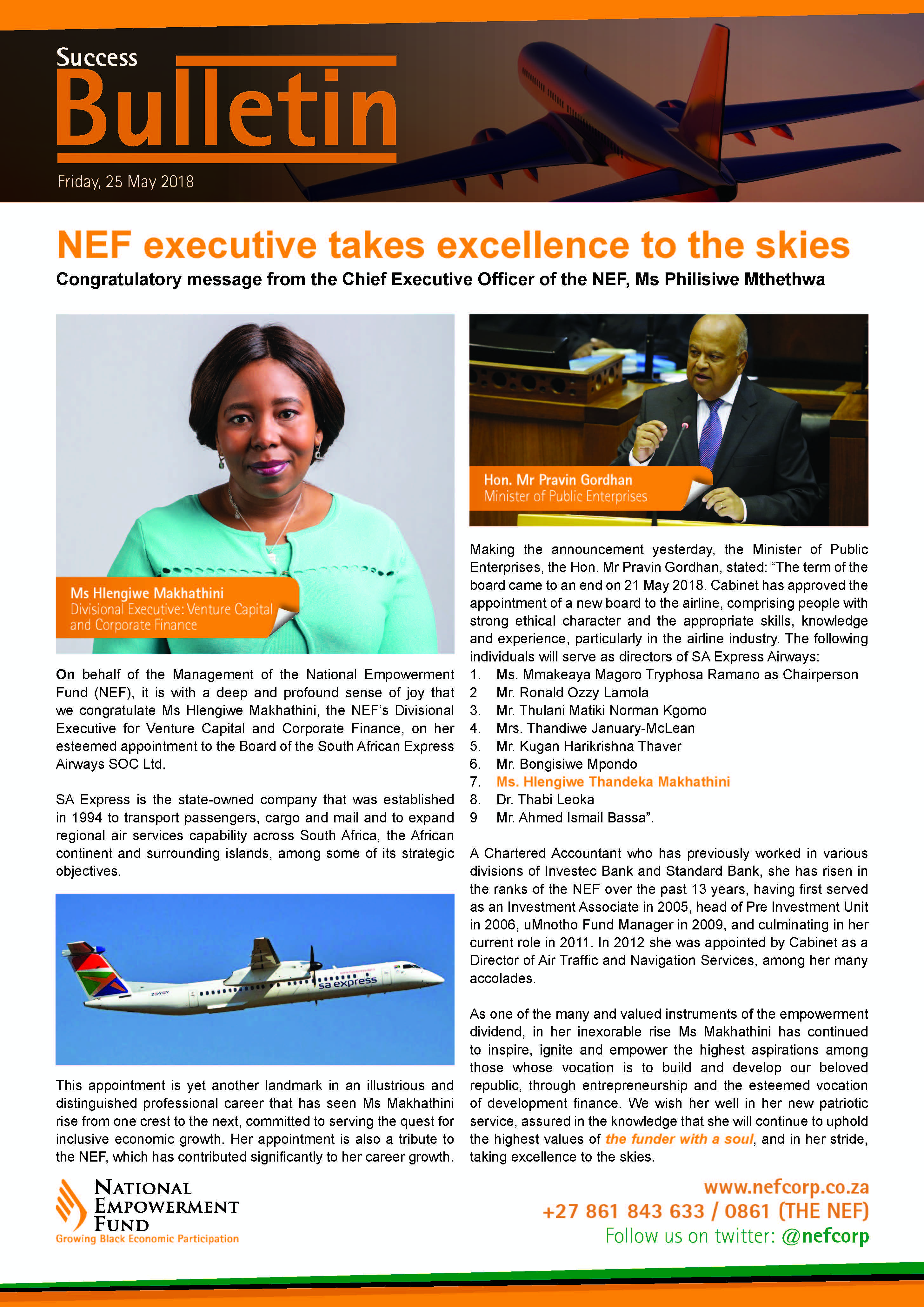 Congratulatory message from the Chief Executive Officer of the NEF, Ms Philisiwe Mthethwa

On behalf of the Management of the National Empowerment Fund (NEF), it is with a deep and profound sense of joy that we congratulate Ms Hlengiwe Makhathini, the NEF’s Divisional Executive for Venture Capital and Corporate Finance, on her esteemed appointment to the Board of the South African Express Airways SOC Ltd.

SA Express is the state-owned company that was established in 1994 to transport passengers, cargo and mail and to expand regional air services capability across South Africa, the African continent and surrounding islands, among some of its strategic objectives.

This appointment is yet another landmark in an illustrious and distinguished professional career that has seen Ms Makhathini rise from one crest to the next, committed to serving the quest for inclusive economic growth. Her appointment is also a tribute to the NEF, which has contributed significantly to her career growth. Making the announcement yesterday, the Minister of Public Enterprises, the Hon. Mr Pravin Gordhan, stated: “The term of the board came to an end on 21 May 2018. Cabinet has approved the appointment of a new board to the airline, comprising people with strong ethical character and the appropriate skills, knowledge and experience, particularly in the airline industry. The following individuals will serve as directors of SA Express Airways:

A Chartered Accountant who has previously worked in various divisions of Investec Bank and Standard Bank, she has risen in the ranks of the NEF over the past 13 years, having first served as an Investment Associate in 2005, head of Pre Investment Unit in 2006, uMnotho Fund Manager in 2009, and culminating in her current role in 2011. In 2012 she was appointed by Cabinet as a Director of Air Traffic and Navigation Services, among her many accolades.

As one of the many and valued instruments of the empowerment dividend, in her inexorable rise Ms Makhathini has continued to inspire, ignite and empower the highest aspirations among those whose vocation is to build and develop our beloved republic, through entrepreneurship and the esteemed vocation of development finance. We wish her well in her new patriotic service, assured in the knowledge that she will continue to uphold the highest values of the funder with a soul, and in her stride, taking excellence to the skies.

Thank you, NEF. You’ve put a smile on my face

According to 2017 gender research by Amnesty International, there are currently 31 million girls of primary…