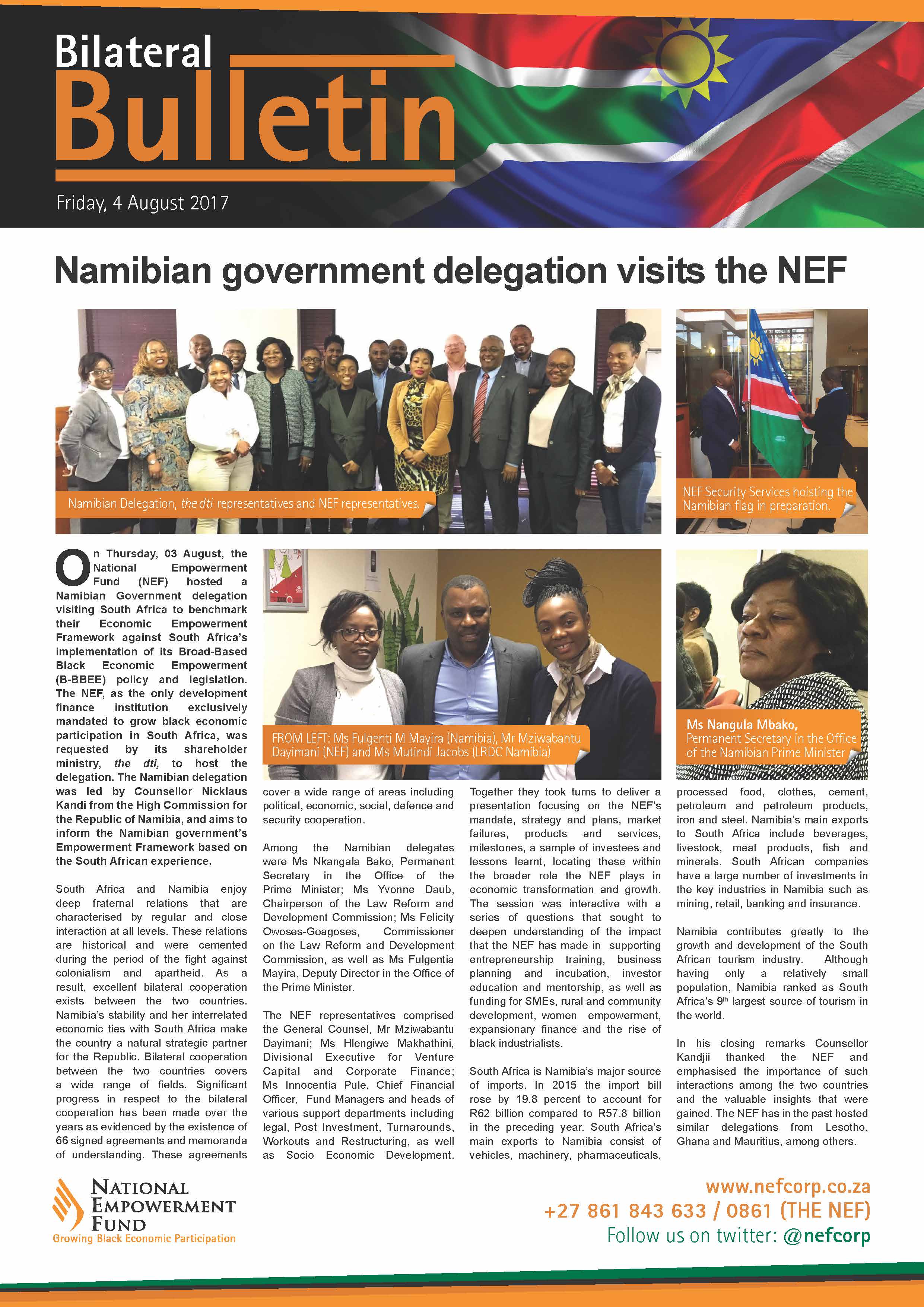 On Thursday, 03 August, the National Empowerment Fund (NEF) hosted a Namibian Government delegation visiting South Africa to benchmark their Economic Empowerment Framework against South Africa’s implementation of its Broad-Based Black Economic Empowerment (B-BBEE) policy and legislation. The NEF, as the only development finance institution exclusively mandated to grow black economic participation in South Africa, was requested by its shareholder ministry, the dtic, to host the delegation. The Namibian delegation was led by Counsellor Nicklaus Kandi from the High Commission for the Republic of Namibia, and aims to inform the Namibian government’s Empowerment Framework based on the South African experience.

South Africa and Namibia enjoy deep fraternal relations that are characterised by regular and close interaction at all levels. These relations are historical and were cemented during the period of the fight against colonialism and apartheid. As a result, excellent bilateral cooperation exists between the two countries. Namibia’s stability and her interrelated economic ties with South Africa make the country a natural strategic partner for the Republic. Bilateral cooperation between the two countries covers a wide range of fields. Significant progress in respect to the bilateral cooperation has been made over the years as evidenced by the existence of 66 signed agreements and memoranda of understanding. These agreements cover a wide range of areas including political, economic, social, defence and security cooperation.

The NEF representatives comprised the General Counsel, Mr Mziwabantu Dayimani; Ms Hlengiwe Makhathini, Divisional Executive for Venture Capital and Corporate Finance; Ms Innocentia Pule, Chief Financial Officer, Fund Managers and heads of various support departments including legal, Post Investment, Turnarounds, Workouts and Restructuring, as well as Socio Economic Development. Together they took turns to deliver a presentation focusing on the NEF’s mandate, strategy and plans, market failures, products and services, milestones, a sample of investees and lessons learnt, locating these within the broader role the NEF plays in economic transformation and growth. The session was interactive with a series of questions that sought to deepen understanding of the impact that the NEF has made in supporting entrepreneurship training, business planning and incubation, investor education and mentorship, as well as funding for SMEs, rural and community development, women empowerment, expansionary finance and the rise of black industrialists.

Namibia’s main exports to South Africa include beverages, livestock, meat products, fish and minerals. South African companies have a large number of investments in the key industries in Namibia such as mining, retail, banking and insurance. Namibia contributes greatly to the growth and development of the South African tourism industry. Although having only a relatively small population, Namibia ranked as South Africa’s 9th largest source of tourism in the world.

In his closing remarks Counsellor Kandjii thanked the NEF and emphasised the importance of such interactions among the two countries and the valuable insights that were gained. The NEF has in the past hosted similar delegations from Lesotho, Ghana and Mauritius, among others.