Three main hospital groups dominate the private hospital sector in South Africa. These three groups hold more than 79% of the market share and the remaining 21% is fragmented and held by independents. This presents a unique and strategic opportunity to bridge the divide and to raise the levels of black participation in the industry. For the financial year 2013/2014, total healthcare sector expenditure was in the region of R286 billion (USD21 billion €18 million), or approximately 8.3% of GDP. Of this total amount, approximately ZAR140 billion (USD10.5 billion €8.8 million), was spent in the public sector, and ZAR146 billion (USD11 billion €9.2 million) in the private sector. BusaMed aims to develop centres of excellence which will provide world-class services. The first hospital, a cardiology centre in the Western Cape province in Strand, has been operating since May 2015. The second hospital in the Gauteng province, a sports science centre, opened in July 2016 and the Harrismith hospital opened in September 2016. The last hospital in Free State province, to be located in Bloemfontein will open in the first quarter of 2018. The group has also made further acquisitions of existing hospitals. 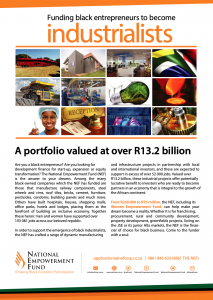